The STRATHEWEN ANGUS breeding program is centred around a core of high quality females selected for structural soundness, fertility, temperament and genetic superiority for the marbled meat markets.

We have sourced outstanding females from some of the best studs in Australia and the USA. Deriving from the legendary Merrigrange Vicky D114, Supreme Exhibit at the Royal Melbourne Show in 1987 and winner of ten other Royal Championships. In 1999 we bought the fourteen-year-old champion and her outstanding grand-daughter, Merridale Vicky S164 and we bred natural and Embryo Transfer daughters and grand-daughters from both of these exceptional females. We later sold S164 privately for $10,000.

The Mittagong female line originated at Te Mania. We chose Ebony Hills Mittagong T1 (NPWT1) as the top heifer at the 1999 Angus National and bought her and her dam. T1 is the classic cow with ideal structure and a great udder, frame score 5, high fertility and excellent temperament. She flushed well and her embryos were always in demand –
one customer taking 23 of one mating. Other customers bred bulls which topped their sales. We later sold T1 privately for $8,000 and we sold a grand-daughter of T1 privately to Lawsons Angus. Our current top Mittagong females are out of J23, one of the leading performance cows in the breed. 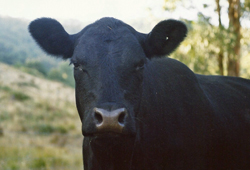 Our Franchita / Trump line originated with an outstanding cow we bought a half share of at the 1997 Angus National. Glen Arm Quita Q26 (VVRQ26) is by Brost Trump, which Tibbooburra imported from the USA, out of Glen Arm Franchita which has two lines back to HF Professor. We sold embryos from her at the 1998 National and sold junior bulls from her at the 2000 and 2001 Nationals for a top of $8000. One bull calf was the Reserve Junior Champion Performance Bull at the 2001 Angus National (beaten only by another STRATHEWEN bull for the broad ribbon). All her progeny have very good temperaments. We sold our half share of Q26 for $9,000 and sold a grand-daughter for $11,000. Q26 was a prolific embryo donor and her daughters and grand-daughters inherited that trait.

We bought Booroomooka Uramba U217 (NGMU217) in 2002 after a search of OB45 females throughout Australia. A flush brother of U217 sold for $12,500. After flushing U217 several times we sold her to Stephen Handbury, Anvil Angus. Her daughter, Booroomooka Wilpena W291 (NGMW291) was an outstanding cow which has also flushed well and produced animals with very good structure and excellent carcase traits. W291 gave us 8 daughters. Our Wilpena dams C48 by Bando 5175 and E22 by Hidden Valley Timeout have given us outstanding heifers. E22 is also the dam of our super AI sire STRATHEWEN BERKLEY G34 by Te Mania Berkley.

In 2002 we purchased Banquet Dream V71, by Summitcrest Scotch Cap OB45 out of the originator of the highly successful Banquet Dream cow line, Banquet Kiwi Dream (VON M41). M41 is by Atahua Legacy out of a New Zealand cow sired by Waitapu Governor. M41 also produced the bull bought early in 2005 by Stephen Handbury at auction for a record $50,000 at age 22 months. A great-grand-daughter of M41 was Interbreed Junior Champion Female at the 2005 Melbourne Show. F31 and her stunning daughter K18 have given us our current Dream heifers and embryos.

Our Sunbeam line derived originally from Victoree Angus stud. The Strathewen Sunbeams commenced with Strathewen Sunbeam S3. The mating of GT Maximum, one of the best sires for growth and muscle, with a daughter of GDAR Traveler 71, one of the best sires in the breed for maternal qualities, produced a big-bodied cow with excellent balance across all traits. S3 was a great producer of embryos and her daughter and grand-daughter also flushed well. Her descendants typically have her deep body type and are much sought after by buyers.

Our home bred Jade female line derives from Strathewen Jade J3. J3 was the best of the foundation cows we bred from pure Australian/New Zealand bloodlines and which we used in 1992 to start our AI program using USA sires. J3 had the best milk and maternal characteristics of all our foundation cows and she also threw the most impressive calves – smooth in style with ideal structures, excellent growth rates and quiet temperaments. She was a small cow and nothing special to look at, but she quickly got pregnant every year and gave us calves almost as big as herself at weaning. Her pedigree included Te Mania Uranium, Black Velvet
Massive, Lubra Bend, Barwidgee, Menabilly, Hendra Park, Brookfields (NZ) and Merrigrange Lois bloodlines – all significant names of the 1980s. The Jade females such as C05 and C06, by New Design 1407, and their daughters have continued to match the best cows we bought from other studs.

Our Erica line is from the highly successful Summitcrest stud in the USA. Booroomooka bred the pure Summitcrest female Boroomooka Tariku T14 by mating Summitcrest Scotch Cap OB45 with Summitcrest Erica X341, a Premier Independence daughter of a Summitcrest Power Play cow. Kansas Angus in Boggabri, NSW, bought T14 and flushed her. We purchased embryos in 2001 and Strathewen Erica X07 was the result. The excellent D02 by Hyline Right Time out of a New Design 208 daughter is a great example of what this line can do.

In 2004 we purchased two heifers which derive from a Blackbird cow line from G A R (Gardiner Angus Ranch) in the USA. Black Label New Direction X121 and X122 were daughters of Ythanbrae New Design 036 U9 which is out of a G A R cow with a pedigree including GT Maximum and Tehama Bando 155, from the G A R Blackbird female line. U9 is a full sister to Lawson’s very successful Ythanbrae Henry VIII U8 which has over 1900 registered calves. We flushed X121 and X122 to several sires. C84 by Te Mania Yorkshire and D52 by Sitz New Design 458N were good representatives of this line and their F and G daughters followed in their footsteps.